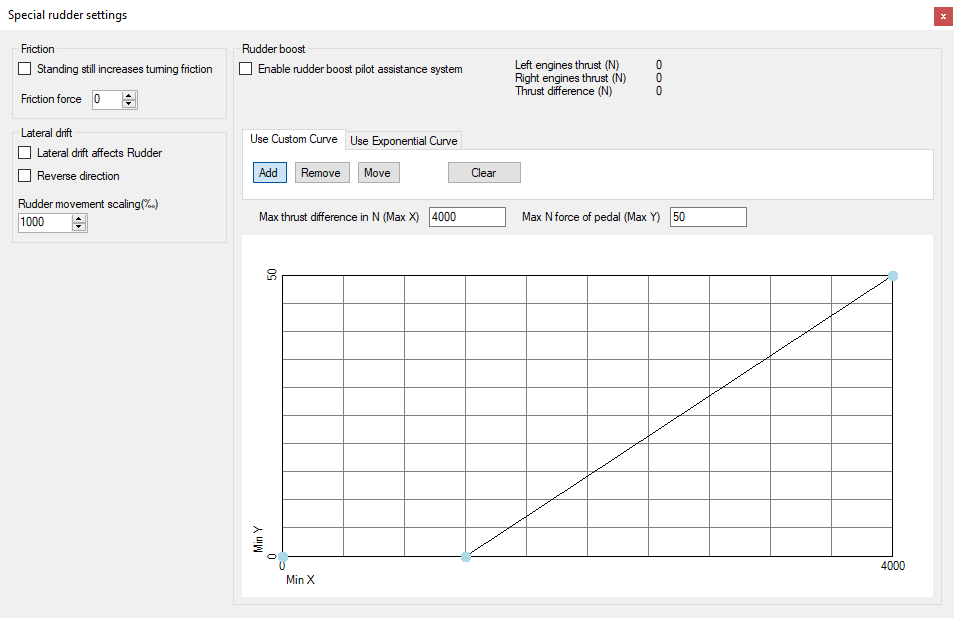 We had another look at the rudder displacement feature and tried to make some improvements.
Please be advised that these improvements are experimental.
We will also explain here in more detail, what design decisions we made, and what constraints of X-Plane led to these decisions.

Asymmetric thrust effect on the rudder

If a plane has asymmetric thrust, the sideslip angle of the plane increases.
As it now flies 'sideways', the rudder control surface in its middle position is standing in the wind.
The rudder deflection surface gets pushed into the position with the lease air resistance.
A simplification of the effect would be, that the rudder will try to assume an angle parallel to the flight direction instead of the direction the plane points to.

So the desired effect on the rudder, would be to change the rest position of the rudder to a position equaling the current slip angle.
To activate this effect, see the checkbox 'Lateral drift affects rudder'.
We have to set rudder position as a value from -1 to 1, that means we need to know what angle the rudder would have a maximum deflection.
This setting is the 'Max rudder deflection angle'.
We can then use the slip angle to determine the desired rudder pedals rest position.

Shortcomings of the slipangle method

This creates a feedback loop, where the rudder will slowly move to the left or right deflection limit.
To combat this, we have added a feedback loop suppression. (Setting is 'Suppress feedback loop').
If the rudder rest position is moved away from 0 because of a slip angle input, we will subtract that offset from the position.
Now when the rudder comes to rest at its slightly displaced rest position, the sim yaw input will still be 0.

Using data for asymmetric thrust, that is not influenced by yaw input from the user

A preferable solution would be a data input, that gives information about asymmetric thrust, without being influenced by sim yaw input.
The problem here is, that we can't read a slip angle for engines and yaw input separately.
Instead we have thrust data for each engine. While we would need more information to calculate a slip angle,
this data allows an approximation.